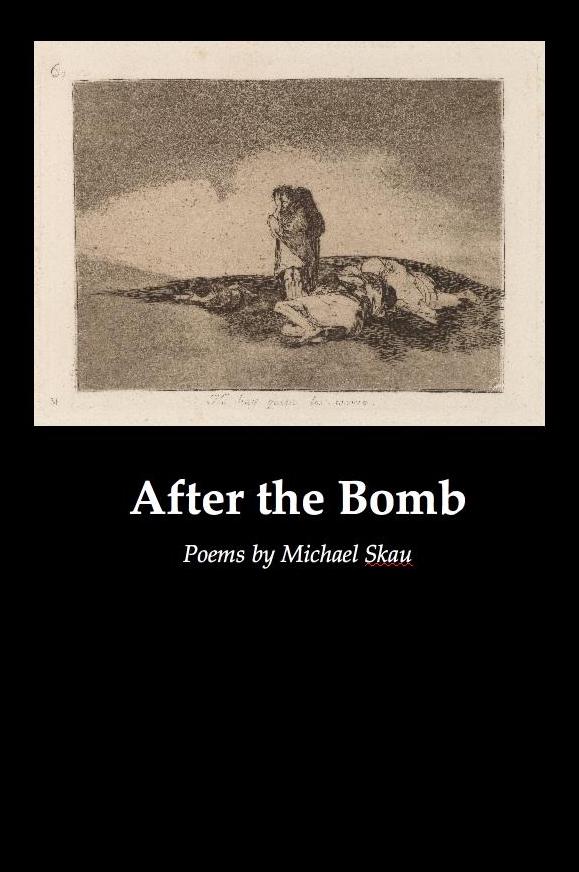 After the Bomb, Poems by Michael Skau

After the Bomb is a series of syllabic poems envisioning a post-apocalyptic world where the survivors struggle for a meager existence and for moral and ethical sanity in a necessarily brutal, violent, and inhospitable environment. The narrator and his fellow sufferers gradually develop a vulnerable sense of community and tentatively grow toward a qualified humanism, with which they cannot always feel comfortable.

"As the title portends, these poems show us a post-apocalyptic world and they do so in unforgettable detail. Resolute, the narrator explores with us a realm where 'every action seems purposeless and futile,' until ultimately we are led toward community."-Marjorie Saiser

"In his lyrical chapbook After the Bomb, Michael Skau crafts a series of hybrid sonnets that connects both kindness and anger in 'a world as afraid of birth as death.' Skau's brave imagery directly confronts nuclear fallout and how people adapt or perish. These rich poems offer an incredible range, from 'Tumbleweed love' and survival, to graffiti left on a church pew that states, 'GOD IS A BULLY.' After the Bomb, through startling details and thoughtful insights, asks difficult questions about our humanity."-Michael Catherwood

"After the Bomb is a searing, dystopian series of poems depicting defaced and gravely-wounded bands of humans wandering, ghost-like, through the post-apocalyptic landscape of a nuclear holocaust. Psychologically stunned and physically altered beyond recognition, these wanderers stumble out of civilization's ground zero, and-with a strange and eerie loveliness-tentatively extend themselves toward a reclamation of nascent humanism, like delicate plant fronds unfurling toward sunlight. In these poems, horror and devastation are counterweighted by Michael Skau's deft use of elegant, syllabic lines, gorgeous gray-scale images, and musical language. After the Bomb is timely, ideologically powerful, and haunting."-Lee Ann Roripaugh