A Language the Land is Inventing, Poems by Ann Philips 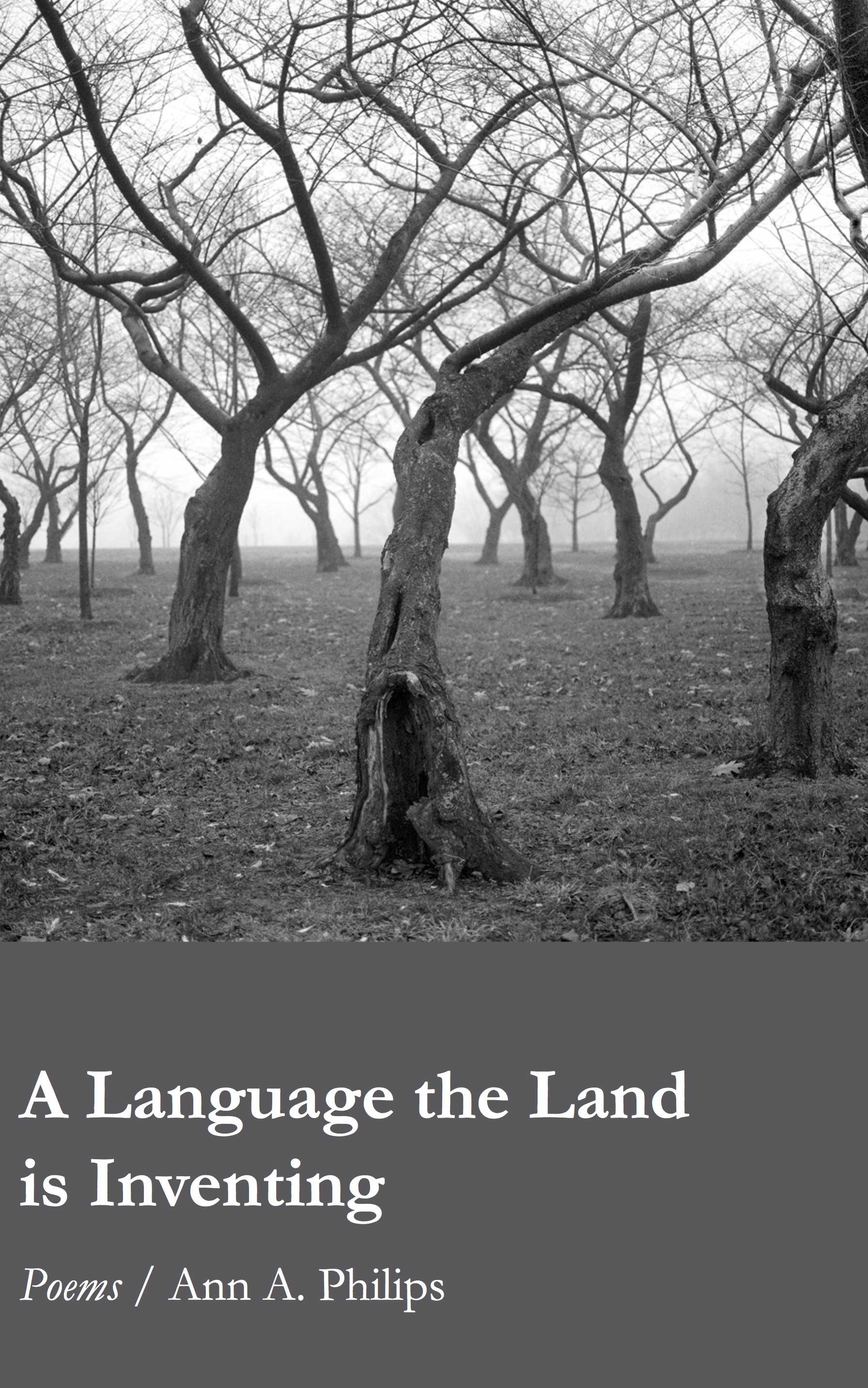 Line by etched line, the poems of A Language the Land is Inventing speak intimate words of our shared experience with the world, our deep intertwinings.

"If it is not only the diction out of Hopkins or Heaney that delights in Ann Philips' poetry (phrases like 'Death smuts the air,' a 'hullabaloo of boys') and if it is not merely the intelligence of this speaker speaking from her awareness of others, other creatures, the sentience of rivers and creeping things and trees, the holy experience of Being like speeding down a superhighway ('if the only prayer you ever say is/Now'), then it is the wisdom, a kind of genius, I encounter here that makes the work so unforgettable, so clean in its delivery as if it fell to the page fully formed: 'write it once and for all,' she urges in a poem about the dying, 'that what feels like home is being where your father is,/and what feels familiar is you letting him down,/and him allowing it, and you leaving him there.' But even all this dying--from the farewells to houses and childhood, to precious loves, to the senses of the body, and to nature itself--'further the flight in me,' as George Herbert once wrote. Ann Philips is a smash of a poet, and this book is a magnificent achievement, whose language voices, always, affirmation."-David Keplinger

"We, like the speaker in this collection, are taught to love and to suffer, to listen to voices drifting across borders, seasons, and centuries, disarming, to use her phrase, for a short time the hullabaloo of the world around us. Ann Philips' poems take note, finding the right spell of words to reimagine immense histories-the personal, political, and natural, making sacred, as poets do, the otherwise familiar. A Language the Land is Inventing reminds us, as only remarkable books can, of why we read. As the Soviet dissident writes to her husband, 'falling is not for love but for awe that we persist.'"-Jen McClanaghan

"Ann Philips' poems have a rare combination of depth and immediacy, wide meaning and close detail. With her we inhabit surprising places, from the surface of a Saguaro to the doors of sleep; and the particulars of vivid lives, from Chopin to a dung beetle, from Dorothy Parker to a jellyfish. These poems wake us up to the world, sting us and reward us."-Kristin Camitta Zimet

"In Ann Philips' splendid collection A Language the Land Is Inventing, home ranges wide in its scope. A Palestinian poet is taught to whistle through grass in Missouri as a transformative act of peace. A Soviet woman tells her husband, imprisoned in the Gulag, how she sings to his faded geranium and has saved tea for his return. Angels pay visits in magical, mundane ways, whooping cranes and windfarms connect, Saguaro cactus and its mountain transpire in conjunction. Philips' debut invents language that captures the kaleidoscopic wonders of our world."-Judith Bowles

Ann A. Philips' current project explores human-animal relationships and poetry of the animal - the tension between using animals as metaphors of the human condition versus writing animals in their own right, as they experience the world. With an M.A in Russian Literature from Harvard University and an M.S. in Counseling from the University of Southern Maine, she taught writing and literature and worked as a psychotherapist and National Zoo reptile house guide. Her middle-grade novel If You Believe in Mermaids, Don't Tell (Dog Ear, 2007) supports GLBTQ youth. Raised in Columbia, Missouri, she now lives in historic Washington Grove, Maryland.