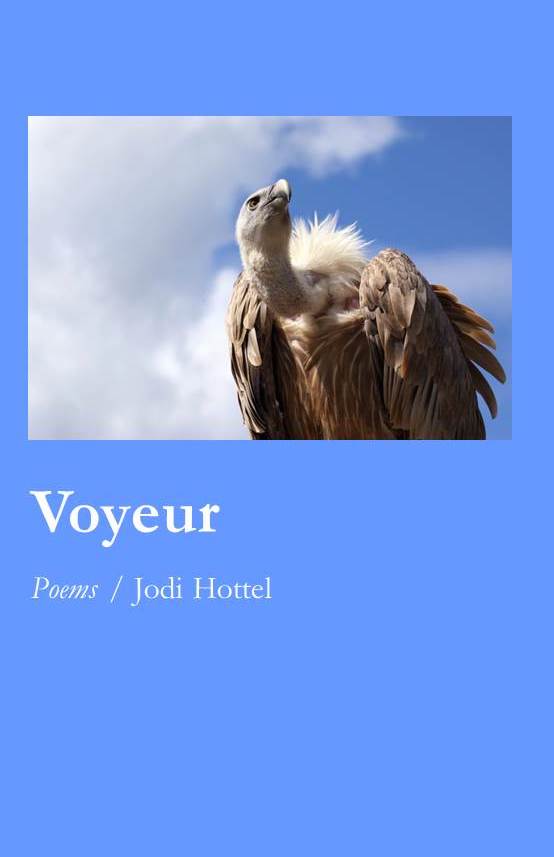 Voyeur by Jodi Hottel is the result of an ongoing interest in ekphrastic poetry related not just to visual art but many artistic forms, including literature and film. When a work of art creates heightened emotion, she responds with poems as varied in style as the works of art themselves.

"When I shared Hottel's ekphrastic poem, 'Crossing', after the painting Boat People, with its creator, painter and poet Lawrence Ferlinghetti, one of his responses was 'She really got it.' Now, as I read one page after another of Voyeur, this sentiment is repeated again and again. Gifted with indispensable detail and deep imagery, these poems invite us to concentrate on history, mythology and our own responses to the world. From vultures presented as 'sky avalanche/a tumble of/boiling birds' in the title poem, to the ghost-like ambience of a doll exhibit; from the poet's personal responses to closed-in imagery of Japanese Americans interred in American concentration camps during World War II, to the vast 'Cliffs of New Mexico as Georgia O'Keefe Saw Them,' Hottel tugs us, willing travelers, from one reality to another, never abandoning the element of surprise as we leap from painting, to sculpture, to photograph, to film, always held in the in the same sure hand of poetry." -Katherine Hastings, Sonoma County poet laureate emerita, author of Shakespeare & Stein Walk Into a Bar

"It is a rare poet who can manage to expose the brutal behavior of human beings while simultaneously depicting the simple acts of selflessness of the oppressed and how they sustain each other. Such is the precise language and tender care for detail that Jodi Hottel's poetry embraces. In Voyeur, a word that comes from the French meaning 'one who views, one who sees', she composes her poems with a voraciousness of someone seeking to consume and somehow preserve every fiber of our senses; her poems are deftly crafted with a lyrical paintbrush of words like alabaster, bone white, and dry salt white 'on a vast white canvas', to touch and remind us of our shared human frailties and strengths." -Joseph Zaccardi, Marin County poet laureate emeritus, author of A Wolf Stands Alone in Water.

"Each of the poems in Jodi Hottel's stunning new collection, Voyeur, offer glimpses into the other world that is created by a piece of art: a sculpture that becomes a sentinel, an urn made of salt that holds memory. Hottel not only describes what she sees, she pulls us in to feel it. In 'Confronting Anti-Mass' we are at once a part of bombed Southern Baptist church where the dead 'rise from ash' and speak back to us. At the heart of the collection are Hottel's poems about the Japanese internment camps such as the haibun, 'Letter to a Nisei Soldier, 1944' where an interned woman holds her two-month-old baby and measures the time her lover has been away at war by the size of a sunflower that grows near her window at the camp. Each poem is an adaptation, reminding us of the power and necessity of art in all its forms. All good art leaves footprints behind for us to follow and march on from." -Iris Jamahl Dunkle, Sonoma County Poet Laureate, author of There's a Ghost in this Machine of Air

Jodi Hottel has been published in Nimrod International, Spillway, Ekphrasis, and anthologies from the University of Iowa Press, Tebot Bach, and the Marin Poetry Center. Her work has been nominated for a Pushcart prize. Heart Mountain, her first chapbook, was winner of the 2012 Blue Light Press Poetry Prize. Voyeur is her second chapbook.