My World: A poet looks at evolution, Darwin and species, Poems by Roni Fuller 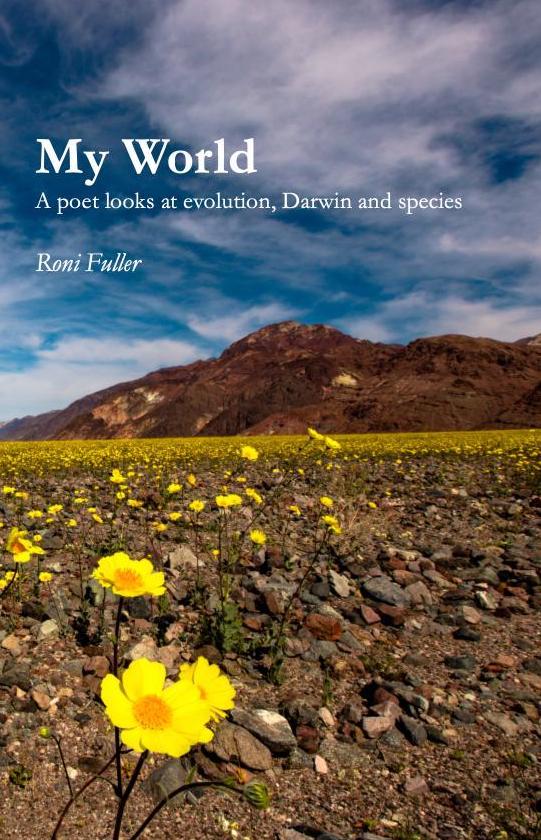 My World by Roni Fuller explores the depths and intricacies of evolution as accomplished fact, using a variety of poetic forms, such as free verse, unrhymed blank verse, and sonnets. The poems bring out the excitement of discovery and the potential for new developments in the field of evolutionary knowledge. Fuller says, "We can hear the earth if we stop to listen."

"My World: A poet looks at evolution, Darwin and species by Roni Fuller resounds with a deep joy in the complexities of our world. His poems address birds, the chambered nautilus, Cyanobacteria, barnacles, and much, much more. By the end of the book, I am left with both a feeling of the inevitability of extinction, ours as well as other species, and a feeling of joy in being able to revel in the painted bunting, the boat-tailed grackle or the oddness of the armadillo. Fuller, who is not a scientist, realizes that there is much he doesn't know, but, at the same time, he sees scientific discovery as a source of wonder. Anyone will be richer for reading these poems, and will find himself/herself, like Fuller 'scheming for joy'."-Jane Elkington Wohl, Author

"In My World: A poet looks at evolution, Darwin, and species," poet Roni Fuller writes, 'the old species call out… I wonder who might hear' and we know who hears: Fuller himself. Often through writing himself into the evolutionary process, Fuller brings voice to the extinct, to ancient life forms, to the widest possible range of living beings. With his confident cadences and sure rhythms, in formal and free-verse, Fuller both celebrates and grieves what Darwin calls 'the schemes and wonders of nature.' Encountering these poems we have the pleasure of new-born songs, full of surprises, full of questions, full of humor, full of reverence."-Nicola Morris

"Whether he is observing a rare quetzal bird, clueing us in on the intelligence of cephalopods, or musing about the age of our cosmos, Fuller engages and astounds us with his Darwin poems. A compassionate observer with enormous curiosity about our natural world himself and a breadth of knowledge to match, Fuller is the ideal poet to guide us through Darwin's remarkable findings and cull lessons about what might be done to rescue our environmentally threatened world today."- Linda Brandt Myers, poet and essayist