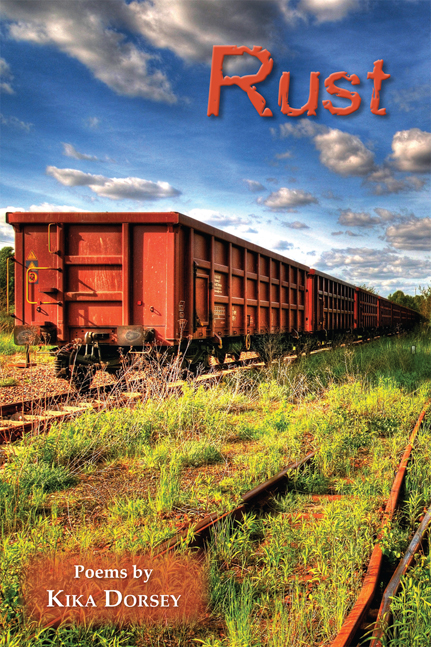 The rich poems of Rust are a sensory and sensual pleasure, ranging from grief to ecstasy in their passage up and down the scales.

"Rife with mythology, whether it be Egyptian stories about Mother Nut and her night sky of 'piglets stars,' or tales taken from the Christian paradigm (and reshaped), Kika Dorsey's narrative poetry is a surreal dreamscape that is just as grounding as it is visionary. Rust is a psychological journey that carries the reader back and forth from the sea to the desert, and all the while through a complicated maze of time comprised of season, memory, and fevered dreaming; via the lens of the ever-lasting, Dorsey reminds us that life is temporary, and dares us to go swimming with our own demons."-Sarah Elizabeth Schantz

"The lushly lyrical narratives of Rust are, essentially, poems of grief infused with Kika Dorsey's dreamscapes, elegies that lament on the surface of things the early loss of the poet's father to schizophrenia-rust the color of her father's hair in the coffin-and the more gradual loss of her mother later to the ravages of a different disease, Alzheimer's: 'Her thoughts are the wrinkles of water over a river's stone' ('A Photograph of My Mother'). With Rust, we are in the hands of a poet who writes beautifully about grievous themes, one who has grappled with the shadow side of human consciousness on her own behalf and on ours, and one who offers hope to those who struggle with their own demons: 'I've given birth despite it all to joy' ('Tap Me on the Shoulder').'--Clare MacQueen

"Controlled, yet unpredictable. Dorsey mines the unconscious to dispense images that are as vivid as they are inevitable."-Junior Burke